Village Church Gets a New Lease of Life Thanks to Scotframe

East Wittering is a quintessential English seaside village, with the timeless quality of long, lazy summers. Its roots go back to Saxon times and it is mentioned in the Domesday Book. It looks out over the Channel, from whose grey waters wartime troops emerged on to the village’s long sand and shingle beach to train for the D-Day landings.

When the Pastor and congregation of the popular United Reformed Church in the village wanted a new church building, however, they turned to a company which is based about as far away as possible from the Channel coast … in the heart of Scotland.

The simple reason that the church and its project manager Keith McNally chose Scotframe Timber Engineering, which supplies to customers across the UK from its manufacturing facilities in Cumbernauld near Glasgow and Inverurie in Aberdeenshire, was that while other companies saw problems, it provided answers.

East Wittering United Reformed Church
The church at East Wittering has been on the site just back from the village’s main street for many years and has not only provided spiritual comfort but has acted as a community focus for social interaction through classes and club activities.

Its congregation, which had grown substantially since the old wooden church building was erected in the sixties, is swollen each summer by holidaymakers and seasonal visitors. It became clear at the start of the century that the church no longer had the necessary capacity to fulfill its important role. Its age also meant that ongoing maintenance was becoming an increasing burden and insurance costs and restrictions were becoming onerous.

It was therefore decided in 2003 to apply for planning permission for a purpose-built, regulatory-compliant building of orthodox construction which would serve the community for many years to come. However, final costs calculated at the time proved beyond the means of the financing body, the church’s Southern Synod, and the project was shelved.

In 2007, mindful of the rapidly approaching expiry of the extant planning permission, Keith McNally, director of Home Plan-it, which specializes in the careful management of building projects, was called in by church pastor John Gunning to identify savings and act as project manager. Using the original figures as a starting point, it was clear that considerably more funding would be needed but was just not available. Keith said: “The original plan was for an orthodox brick and block build with cavity walls and so on. But the church was looking to save on costs and asked me to investigate more effective options.

“I spoke to a local timber frame company, which said the build would be impossible structurally because of the huge roof span of the church’s main hall. Knowing that timber frame has a much longer tradition in Scotland, I sought out companies there, and that was how I found Scotframe.

Scotframe
“From the beginning, the company went out of its way to help. Its sales, estimating and technical experts were always on hand to explain and advise. Even its transport department detailed exactly how the three stages of the delivery would be handled, and by whom.” 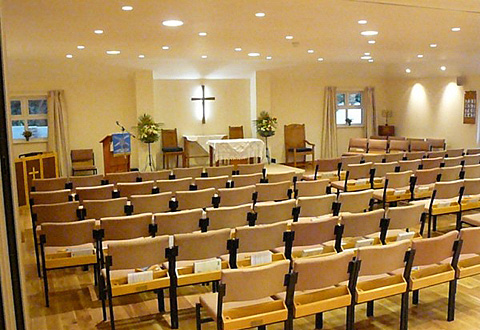 Scotframe’s main activities are the manufacture and supply of timber frame kits to builders and developers for domestic properties, together with one off house packages for the self build market. They do however, also have an enviable reputation for their engineering expertise when it comes to timber frame structures for commercial and industrial properties, it is therefore no surprise that the East Wittering church project simply became their latest challenge.

The building contains a committee room, a vestry, a kitchen and toilets and ramps which were compliant with the Disability Discrimination Act. But its main feature was a huge, open hall and sanctuary, where most of the church activities would take place.

Design and engineering
Scotframe’s design and engineering departments developed solutions which allowed the building to comply fully with the original planning application. The delivery of the materials were made exactly in line with the flexible working schedule of the building contractors KT Construction, led by Tony Hancock, whose team were comfortably able to stream the primary construction workflow.

Tony said: “This was not a type of building we were used to and we fully expected to have to make continuous adjustments, as we often have to do with timber frame kit companies down here. But the Scotframe kit fitted exactly. Everything slotted into place just as the plans dictated.

“I think that is one of the great advantages of their precision timber engineering which they carry out in controlled conditions in their factories.”

Keith said: “We were a bit puzzled at one stage when 200 sheets of ply were delivered, but we found that the norm in Scotland is that ply (also known as sarking) is laid under the roof slates to deal with more extreme snow loading and wind shear problems encountered in the north.

“Typically, English specifications don’t require this additional strength, but Scotframe supplied the sarking anyway as part of their policy of always giving a little bit extra.”

Bearing in mind the revised calculated costs for the original construction specification was in excess of £400,000, with Scotframe on side Keith was delighted to be able to bring the job in at £320,000, including demolition, landscaping and extensive car parking.

The United Reform congregation in the South Coast village is now making its preparations for a grand opening ceremony in October … thanks to the men from the North.